The Eleusa (or Eleousa) (Greek: Ἐλεούσα – tenderness or showing mercy) is a type of depiction of the Virgin Mary in icons in which the infant Jesus Christ is nestled against her cheek.
In the Western church the type is often known as the Virgin of Tenderness.
Such icons have been venerated in the Eastern Church for centuries. Similar types of depictions are also found in Madonna paintings in the Western Church where they are called the Madonna Eleusa, or Virgin of Tenderness. 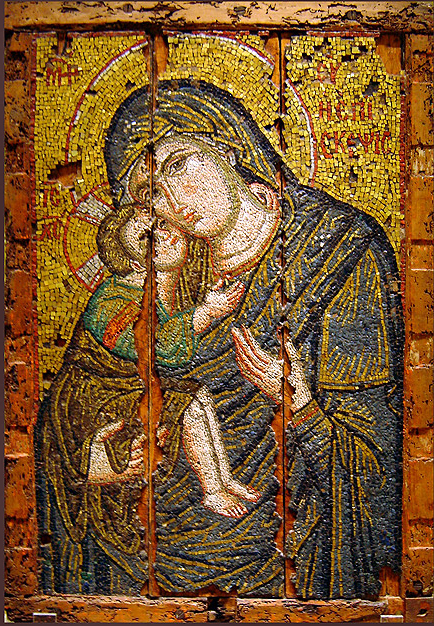 By the 19th century examples such as Lady of refuge (e.g. by Luigi Crosio) were widespread and they were also used in retablos in Mexican art.
While the Eastern Church does not venerate three-dimensional objects, Eleusa-style reliefs and sculptures, as well as icons, have also been used in the Western Church.

Eleusa Virgin Silver/Gold/Colour Orthodox Icon (Arched or Square Frame) is a decorated Bas-relief depicting the original 13th century Byzantine Eleusa mosaic (Athens), and you can buy it on loretogift.com at the lowest price on internet (available also in silver and silver/gold)!
This decorated bas-relief is in anti-oxidizing silver/aluminium laminboard. The surface is glossy and polished.
The back side of the bas-relief is in wood and it is provided with a tongue to be hanged on the wall (stands or hangs).
The bas-relief comes in a box and with certificate of authenticity
Buy safe, buy original, buy italian on loretogift.com 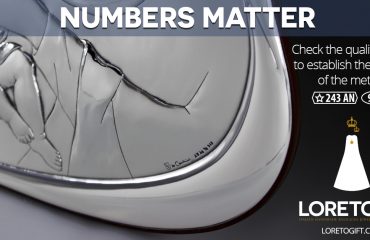